140 million dollar renovation to the Theodore Levin US Courthouse

Built in 1934, the 770,000-square-foot courthouse is located at 231 W. Lafayette Blvd. and takes up an entire city block. It is named after the late judge Theodore Levin, who was chief judge of the court from 1959 to 1967 and the uncle of former U.S. Sen. Carl Levin and U.S. Rep. Sander Levin. Theodore Levin served on that bench from his appointment in 1946 until his death in 1970. It was added to the National Register of Historic Places in 2009.

The GSA approved a four-year, multi-phase project for this 81 year old courthouse. This large-scale renovations project consists upgrading and improving the mechanical, electrical and plumbing infrastructure and numerous building upgrades that will ensure long term occupancy of the federal tenants at this location. 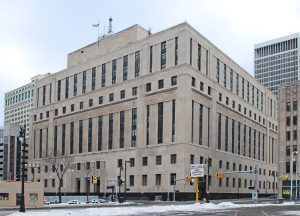 The selected construction manager is the Christman Company. Rival insulation was chosen as one of the selected contractors to provide its specialized services on this critical project.

Rival Insulation’s scope of work consists of duct insulation, piping insulation, and extensive repairs to the existing infrastructure within the facility. With this historic facility, many of the original design elements remained in tack for preservation, so careful planning was required to not damage existing ceiling, wall, and floor facades during our construction.

Another one of the main challenges this project has is that it is fully occupied during construction, so Rival insulation utilizes “just in time” deliveries for all its material deliveries to eliminate any on site storage and stock piles. Also, since this project is a fully occupied, all noise generating activities were performed off hours and construction routes are carefully chosen not to impact the daily operations of the courthouse.

Work is scheduled for completion in 2020.